Panama Canal created Panama the country.  After independence from Spain, Panama region was part of Columbia.  A canal through the region could shorten the journey from Pacific to Atlantic (or vice versa) from 20,000 km to 80 km.  And around 6% of world’s sea traffic would benefit from the canal.  US entered into a treaty with Colombia to build the canal.  Colombia shook hands but dragged its feet in ratifying the treaty.  US got impatient, supported Panama to separate from Colombia, Panama the country came into existence, and US built and owned the canal for 100 years.  Panama obtained ownership/control over the canal in 2000.

Suez canal had it easy.  The Mediterranean sea and the Red Sea had the same water level; there was no need for “locks” to raise or lower ships to higher/lower water level while transiting the canal.

Panama canal was not easy.  Ships need to be raised 26 metres from Pacific to Lake Gatun, and later lowered from Lake Gatun to Atlantic involving in all twelve locks.

The canal contributes to 10% of Panama’s GDP.

It was fun to have an aerial view of the Pacific side entrance to the canal (presided over by the Bridge of Americas) and the modern swanky downtown full of modern skyscrapers. 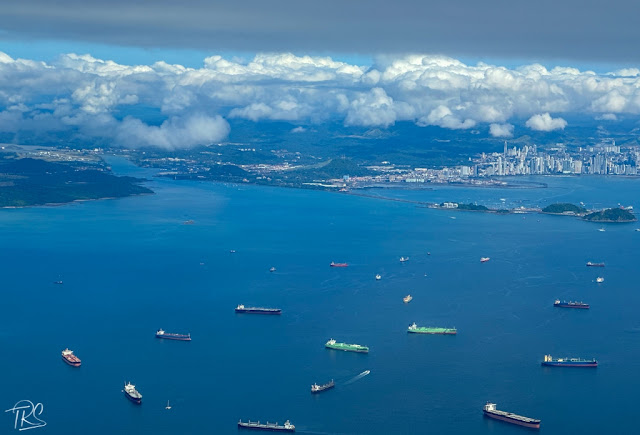 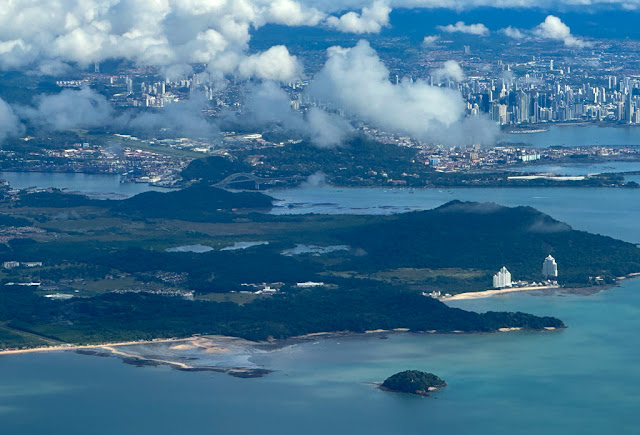 [View of Panama Canal Entrance Pacific side, Bridge of Americas, and Downtown] 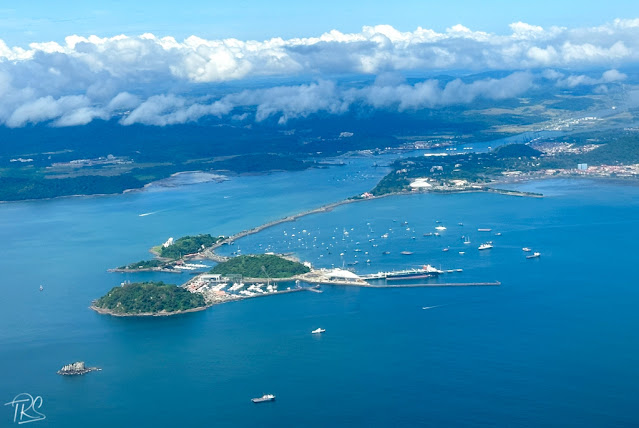 Until Panama secured ownership/control over the canal, income from the canal was miniscule.  After 2000, Panama increased the tariff and used the money wisely to develop Panama City.  Our guide tells us that most of the tall skyscrapers in downtown are less than 20 years old; and were funded by the new extra income from the canal.  Panama’s other major sources of income are tourism and offshore banking services to citizens of the world. 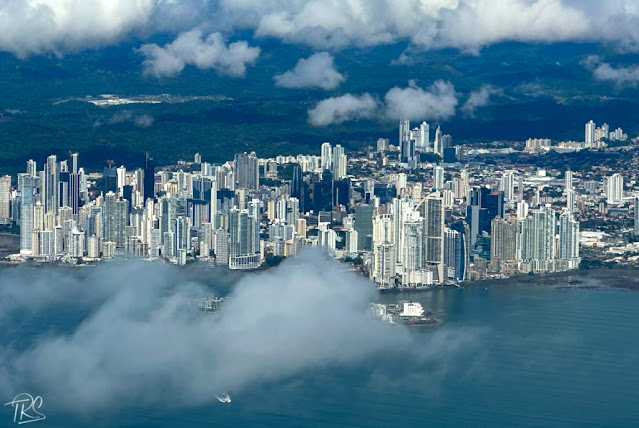 Casco Antiguo, the old town of Panama City is approximately 350 years old and is full of vibrant plazas and elegant cobbled/narrow streets.  Plaza Mayor is a “big ticket” square in the city and has the city’s Cathedral, a Museum of the Canal, and the famous Central Hotel. 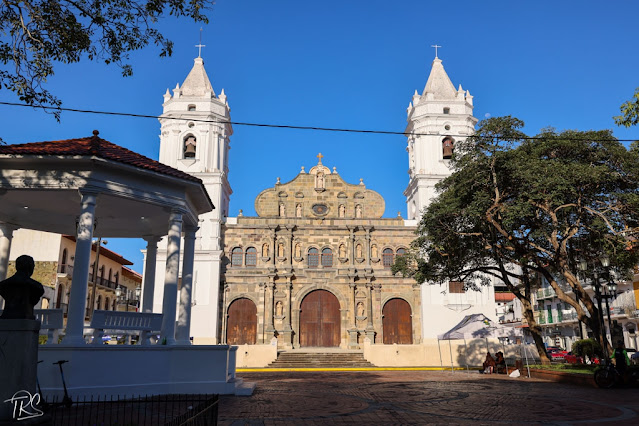 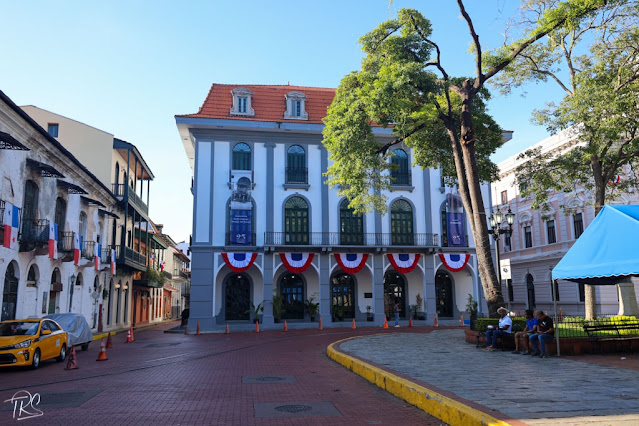 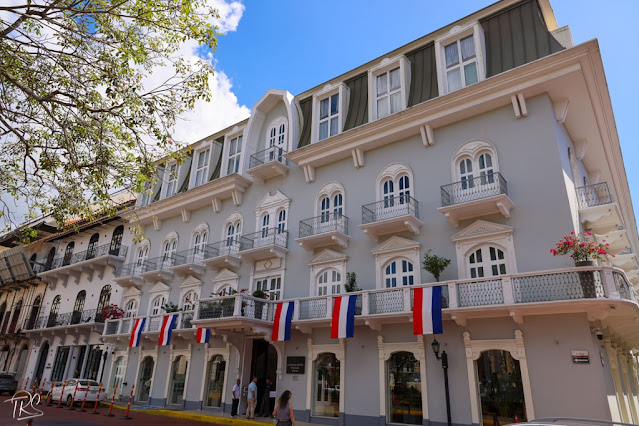 The Canal was not an American dream.  Americans needed the canal badly; and completed it.  It all started as a French dream (by Ferdinand de Lesseps, yes, the man who built Suez Canal).  The French design had several challenges and the French ran out of money.  Though Ferdinand de Lesseps himself got a five years prison sentence for bankruptcy, his legacy lives on in the French quarter of Panama City. 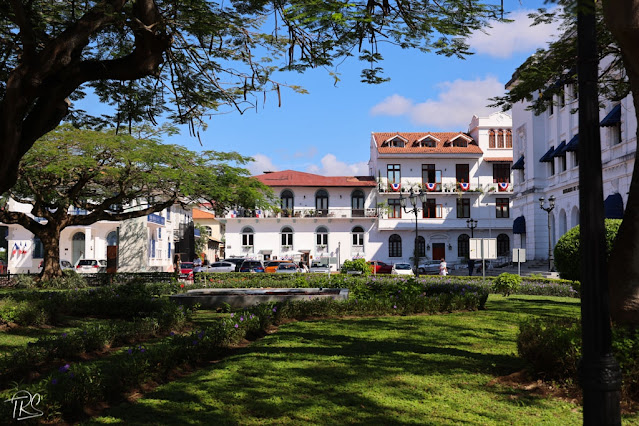 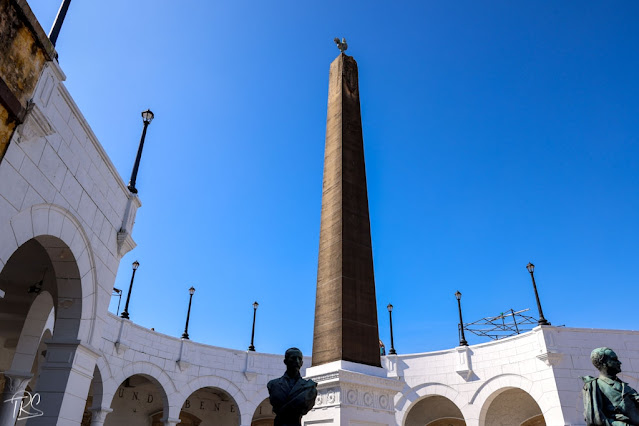 [Conjunto Monumental de Las Bovedas, with a walkway on the defence walls of old city over dungeons that now serve as shops]
Panama's Old city, full of vibrant plazas and narrow cobbled streets, preserves its heritage and is sparkling clean. 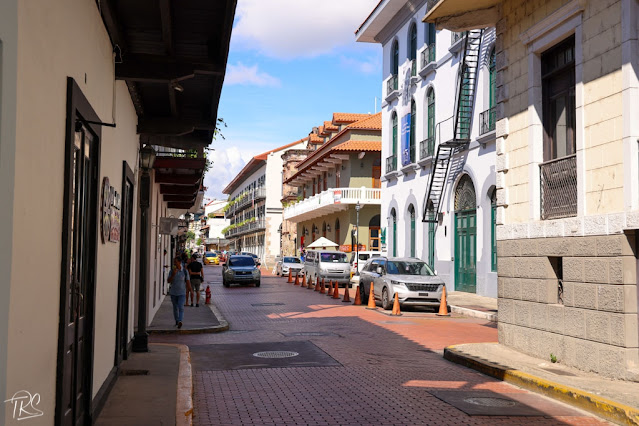 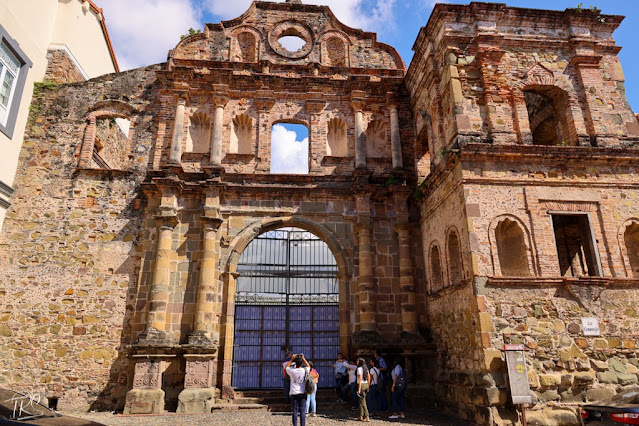 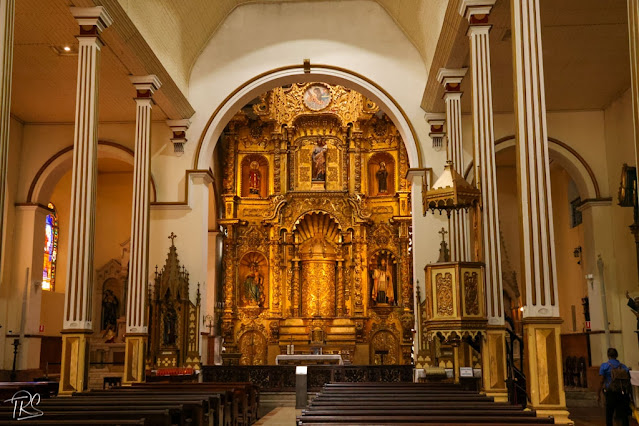 We saw one huge vessel entering the Canal through Miraflores locks from the Pacific side.  Fun fact:  When you are moving from Pacific to Atlantic in the Canal you are moving westward (quite against your geographic intuition) because of the topography of Panama.  The canal runs from South East (Gulf of Panama/Pacific) to North West (Carribean sea/Atlantic). 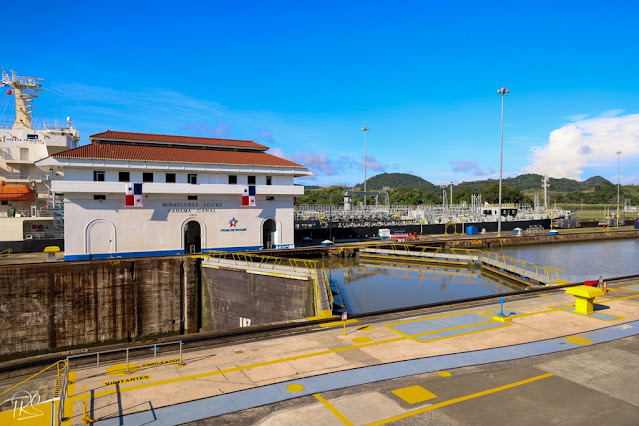 [Miraflores Locks.  A giant ship navigating through the lock]

Panama has built a parallel new channel a decade back.  The new channel can accommodate bigger ships. 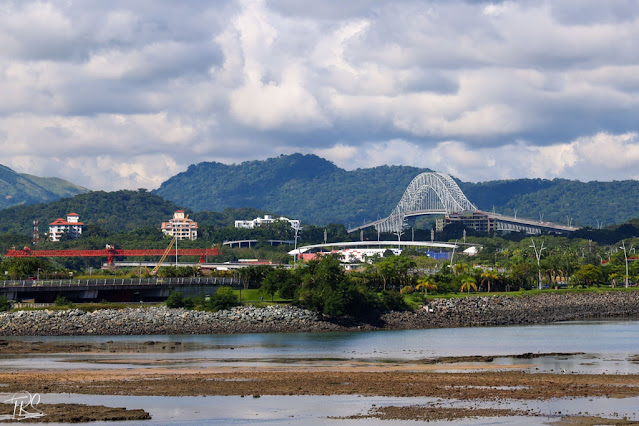 [New locks/channel with a ship navigating through.  Bridge of Americas in background]

The Canal starts at Pacific and connects to the huge Lake Gatun in the middle.  And the second part of the canal connects from Lake Gatun to the Atlantic end.  Lake Gatun has hundreds of islands that host exotic wildlife.  We went around in a private cruise. 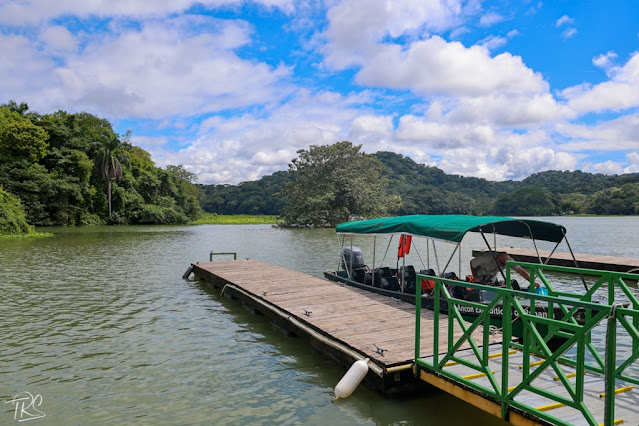 [Our ride for the cruise on Lake Gatun, part of Panama Canal] 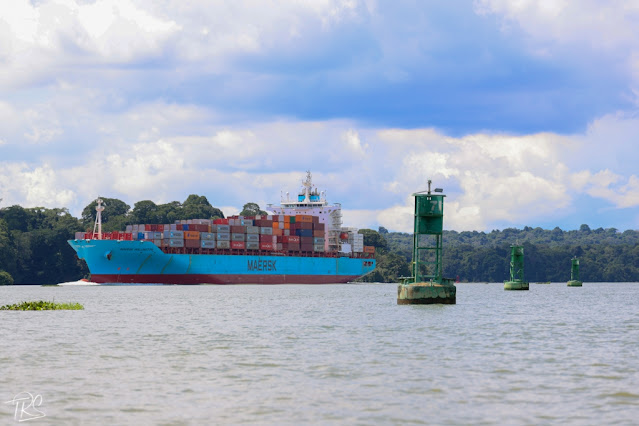 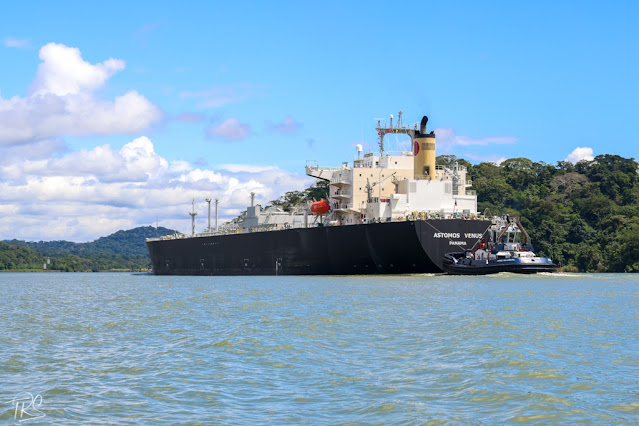 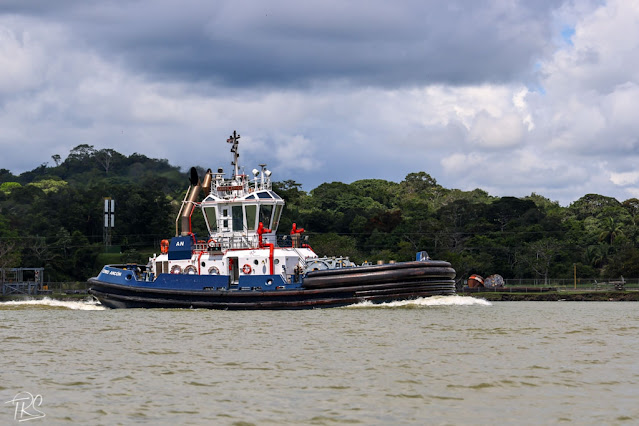 [Island in Lake Gatun; one of our several targets to spot wildlife] 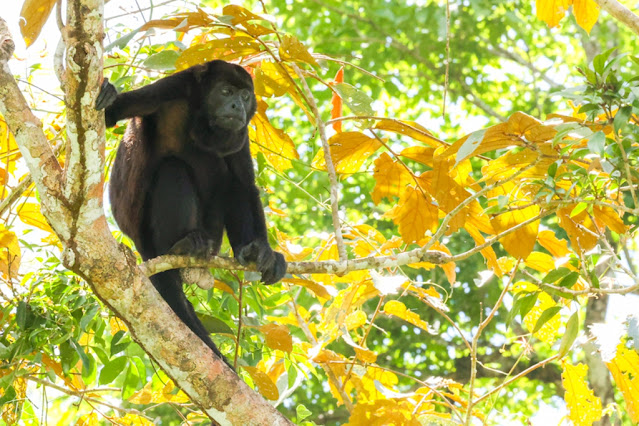 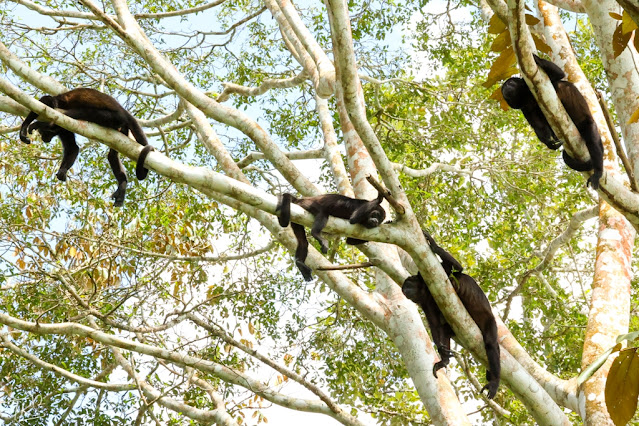 [A troop of Howler monkeys relaxing on a tree; secured to its branches] 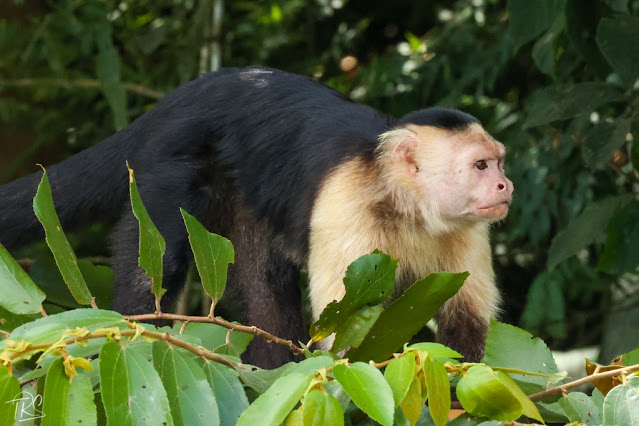 We saw a few birds too. 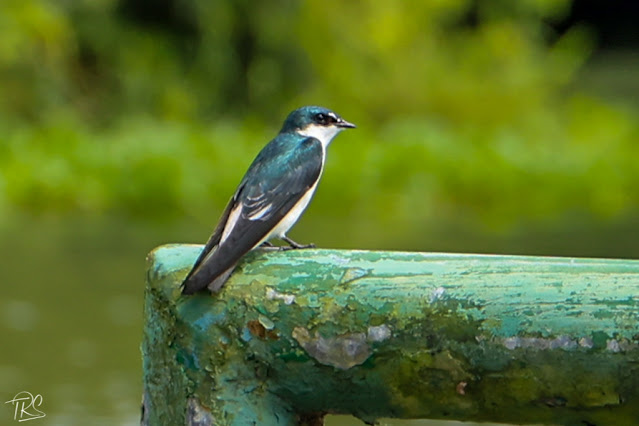 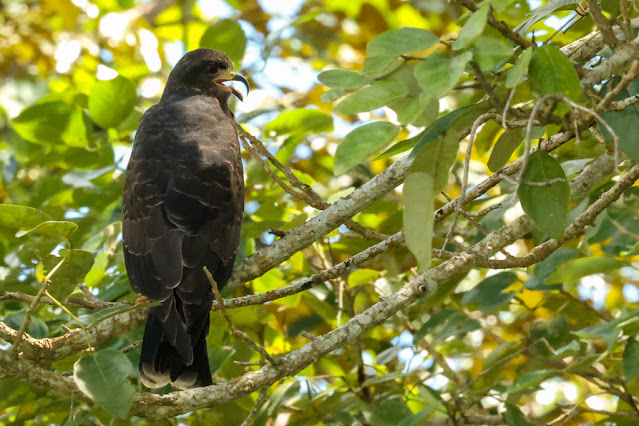 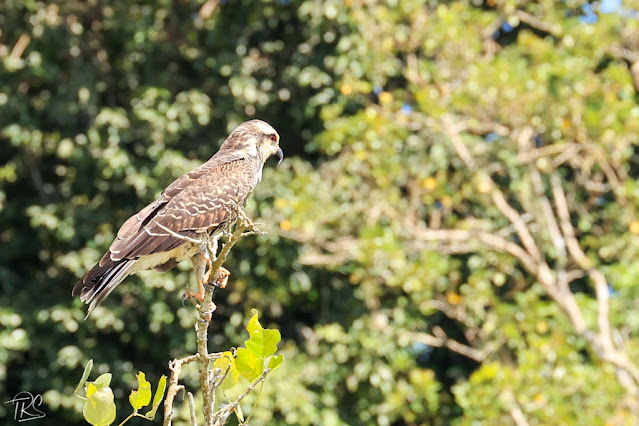 And a Lake Osprey, a hawk that has a wing span in excess of 1.8 metres! 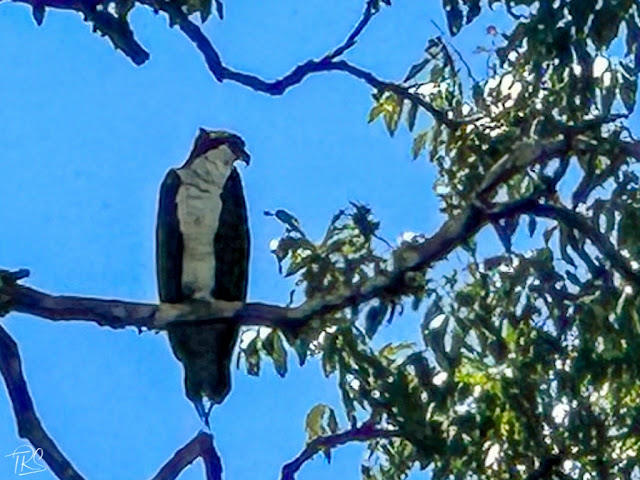 [Lake Osprey perched atop a tree looking for fish to catch] 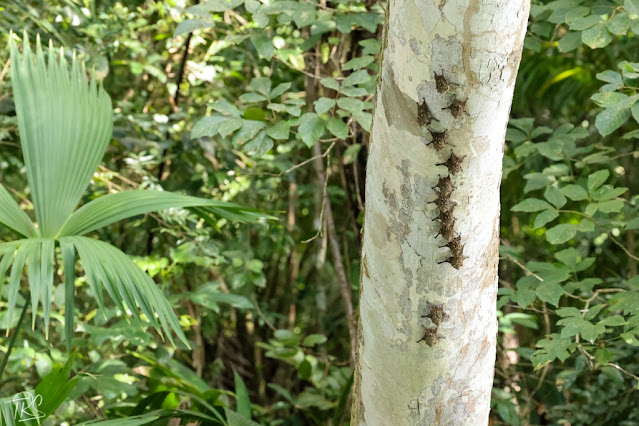 [A colony of white lined bats]

We ended the trip by getting close to a tree to observe a colony of White lined bats.  Our guide, Carlos, explained that white lined bats are very important for the Panama canal ecosystem to disperse seeds, aid cross pollination, and more importantly keep pests under control.

I had one question.  Panama prices between $ 50,000 and $ 500,000 for a ship’s transition based on size.  Could Panama shift to “oil cartel like” monopoly pricing?  Carlos explains that mankind can today construct alternative canals quite quickly through Nicaragua (three times longer) or Colombia (again, three times longer); and therefore Panama would be well advised to retain its “early bird” advantage by pricing sensibly.  Makes sense.  It seems there was a proposal to build a second canal through Nicaragua but its rulers politely declined fearing the trade-off between money and control that Panama had to wither for a hundred years!