Antigua is a small city surrounded on all sides by volcanoes.  The cloud topped .Volcano Agua lords over the city (seen from anywhere in the city).

Antigua was the capital of Guatemala for 200 years during Spanish rule.  An earthquake in 1773 destroyed most of the buildings in the city and the colonial government thought it was better to build a new capital (in nearby Guatemala city) than repair the old one.  Antigua preserves its Spanish heritage in the Old Town (with narrow cobbled streets).

You cannot say you have visited Antigua until you have got a picture of “Arco de Santa Catalina”, the arch bridge connecting the two buildings of the convent on either side of the street.  Story goes that the nuns of the convent bought the property across the street but could not cross the street since they cannot be seen by others.  The Mayor suggested they build an arch bridge without windows connecting the two properties; and the city got its Eiffel Tower. 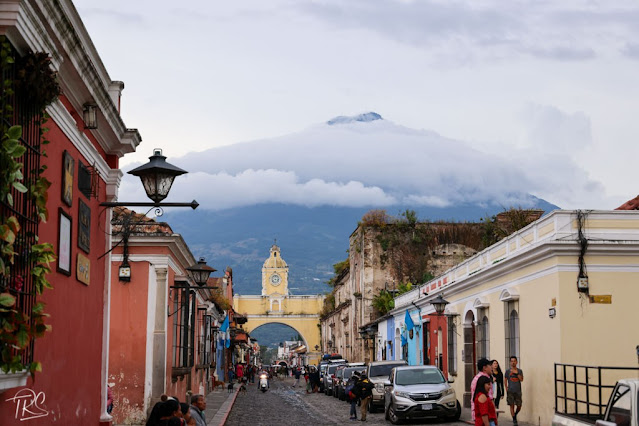 [Arco de Santa Catalina on Fifth Avenue with Volcano Agua as backdrop]
The colonial rulers lived well in Antigua.  Typical residence of a Spanish family in Antigua has an ornate entrance, a spacious courtyard and expansive living quarters. 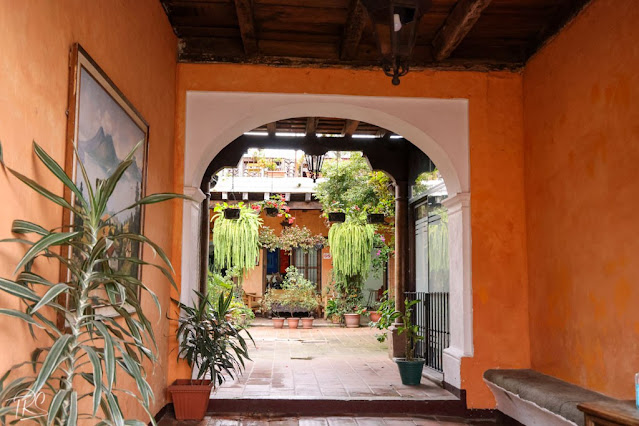 [Residence of a Spanish family in Antigua; a legacy of colonial rule]
Spanish families loved their first borns. The first born inherited property; got married into better and better families, and so on.
What about the subsequent ones?

Boys were sent to military service. Girls were sent to convents such as the “Convento de las Capuchinas”.
Girls from poor families provided cheap labour (and some prayers) at the convent. Girls from rich families came with an endowment and were provided private cells to stay, more leisure time, less work, etc.

Capuchina nuns wore three covers. A dark brown skirt for the lower body; a light brown top for the upper body; and a white hood for the head. Now you know why the three layered coffee is known as "Cappuccino" 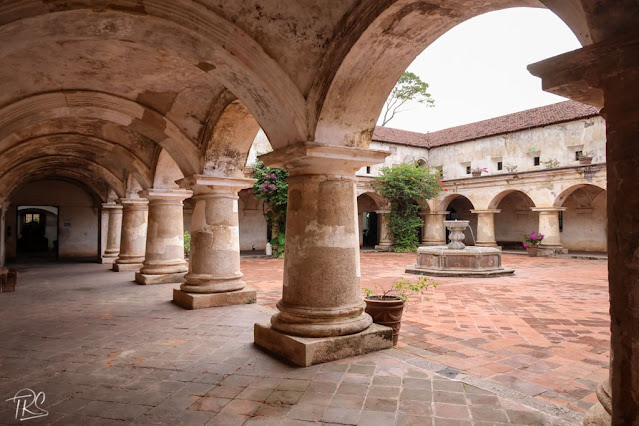 [Courtyard of the “Convent de las Capuchinas”]
In the colonial era, Catholic church had significant influence over rulers.  One arm of the Catholic Church, the Mercedarians, a little more than others.  The Mercedarians specialized in building churches in prison systems of Catholic kingdoms and developed a strong bonding with their member base; and rulers were happy to have some indirect influence with the underworld through the Mercedarians.  La Merced Church in Antigua was the second most important church after the Cathedral. 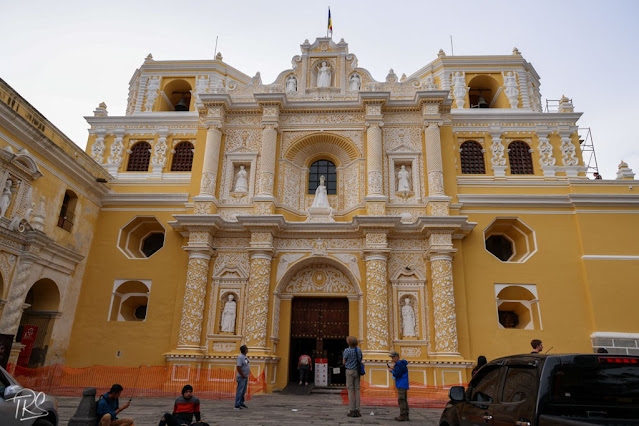 [La Merced Church that promises afterworld to underworld]
Spanish rulers used Mayan concepts for subtle enforcement of their superiority as rulers.  Mayans believed that East constituted life, West maturity (and death), North heaven, and South a place to purify one’s self.  (Mayans did not nurse a belief in the conept of hell].  Spanish administrators had city squares with the Spanish ruler’s residence in North, Mayan administration in South, Church in East, and ahem Merchants Chambers in West. [Mayan Administration Offices in Antigua City Center]
The hills surrounding Antigua, rich in volcanic soil and green vegetation, are awesome spots for bird watching.  We trekked up at the crack of dawn with Myron, a civil engineer, who switched to ornithology midway, to see some wonderful species under Myron’s helpful guidance. 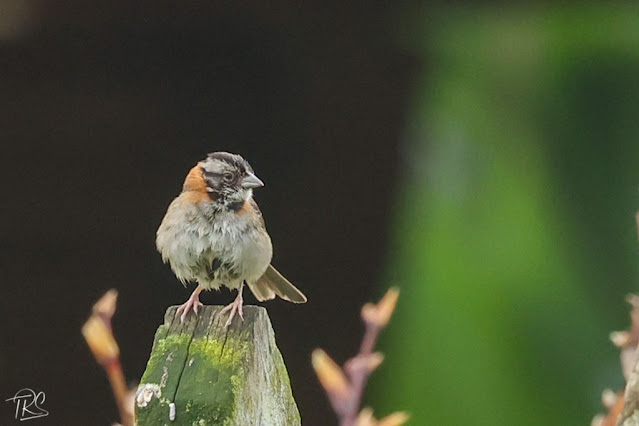 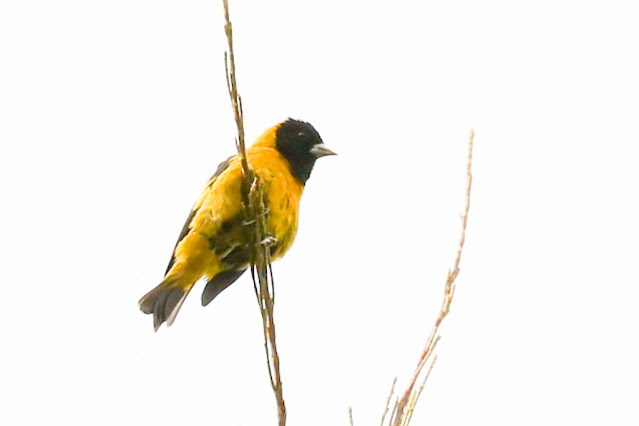 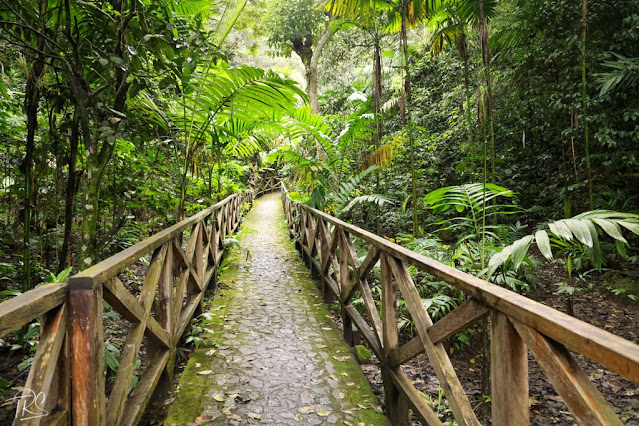 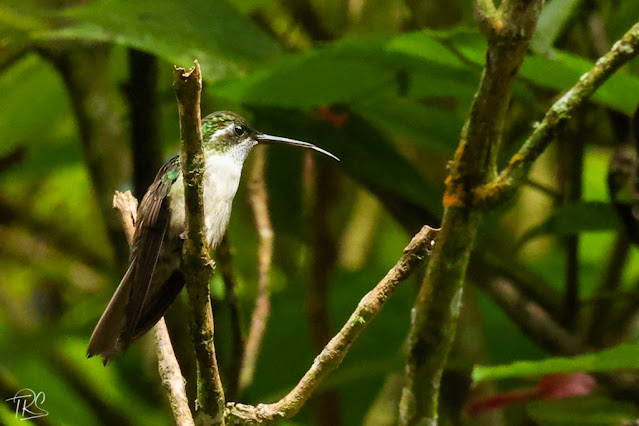 [Green throated Mountain head Hummingbird]
In the volcanic hills surrounding Antigua, as in everywhere else, life triumphs over adversities.  Someone cut a big tree leaving the base of the trunk behind.  And brand new life springs up to use the moisture from clouds and the clean air. 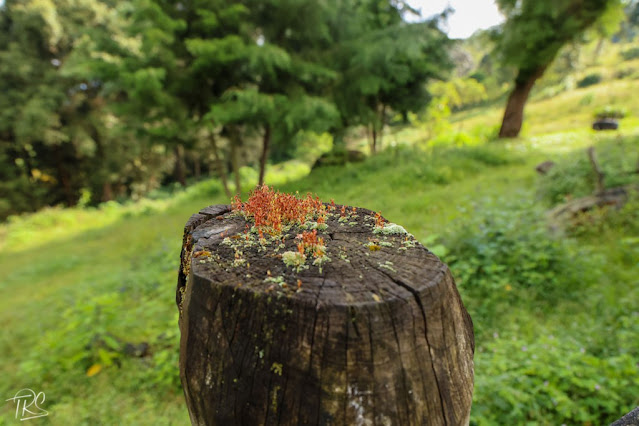 [Life springs on dead trunk]
Posted by T R Santhanakrishnan at 11:21 AM