Nov 2017
Siem Reap, in the North Western part of Cambodia, about 200 km away from the border with Thailand means literally “Defeat of Siam” (so named, as the folklore goes, by a XVI century Cambodian King after repulsing an invading army from Siam (modern day Thailand)
Sime Reap was just a village until French explorer Henri Mouhot’s visit in 1860.  Henri “discovered” an ancient temple that he described as “grander than anything left to humanity by Greece or Rome”:  Angkor Wat.  Since then, Siem Reap has been attracting tourists from afar for the various Khmer temples in its vicinity.  Angkor Wat is the star attraction in Siem Reap.  Angkor Wat is a temple complex (in fact, the largest religious monument in the world) built by Khmer King Suryavarman II in early XII century.    Angkor Wat is quite large; set in a square plot (3 km x 3 km) surrounded by a moat and designed to represent Mount Meru (the home of Devas in Hindu mythology).  It has an outer wall, a middle wall, and an inner wall (each at an increasingly higher level) all surrounding a central area with four towers in four corners and a taller tower in the centre. 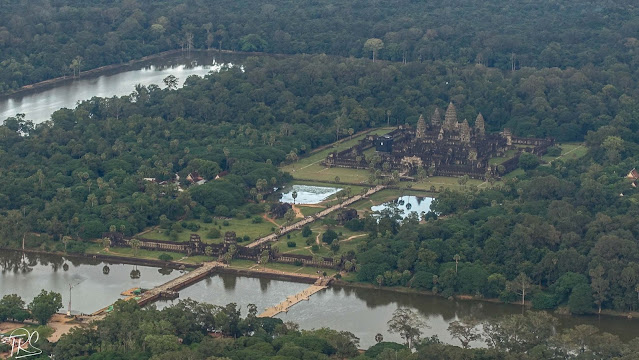 Angkor Wat Temple Complex as seen from a helicopter 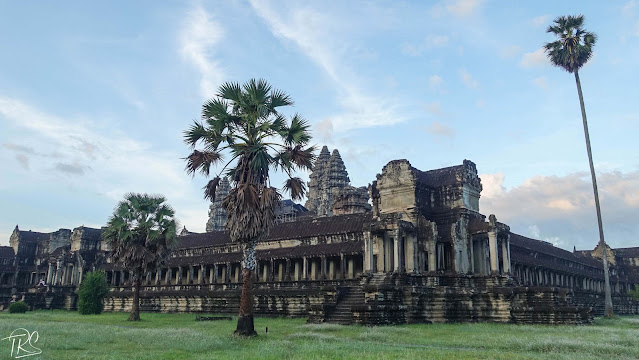 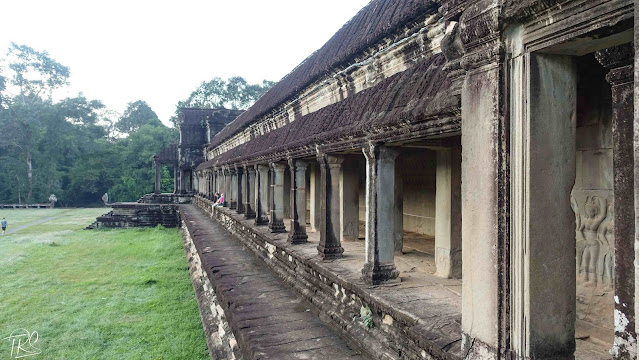 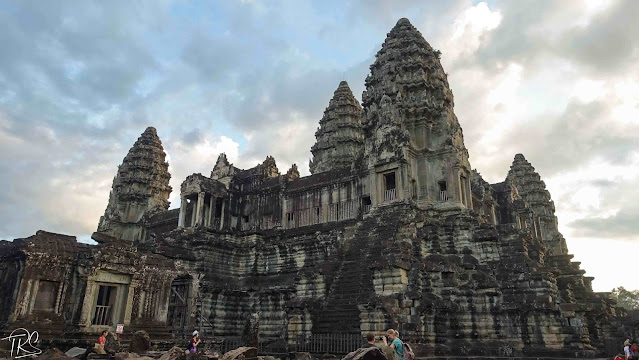 Angkor Wat:  Central Area with its towers
The early Khmer Kings were Hindus.  The temple was built for Hindu God Vishnu.   The temple has extensive bas reliefs depicting scenes from Hindu mythology:  Kurukshetra war (of Mahabharata), the Battle at Lanka (of Ramayana), the Churning of the ocean of milk for ambrosia (of Bhagavat Purana)  etc, every inch carved to depict intense emotions.  Poetry in rock, really. 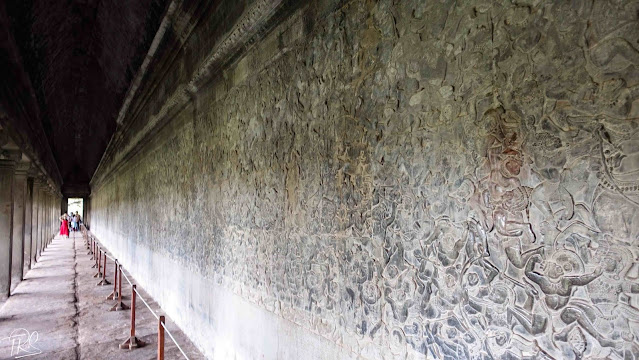 Angkor Wat:  Bas Relief of Battle at Lanka
Siem Reap has several other temples too.    The Bayon is one of them; built in early XIII century by King Jayavarman VII.  The temple has 54 towers and 216 giant faces of Bodhisattva Avalokiteshwara. 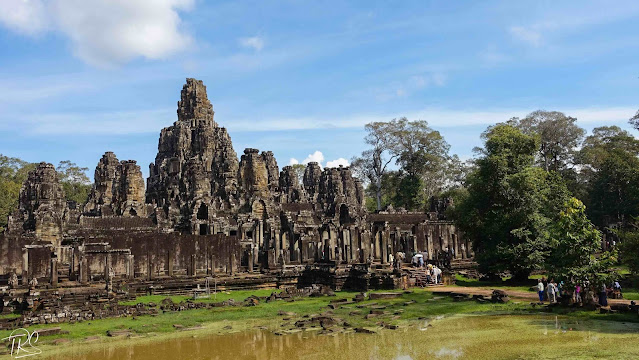 The Bayon Temple
The Ta Prohm temple was also built by Khmer King Jayavarman VII as a Mahayana Buddhist monastery and university.  It was built in a jungle environment by the King to help its inhabitants focus on meditation and acquisition of knowledge.  Little would the King have known that the silk cotton trees would grow to gigantic size and their roots spread all around the temple.  These days, the temple is known as “Angelina Jolie Temple” for the role it played in the Laura Croft movie.  This is probably the most photographed temple in Cambodia. 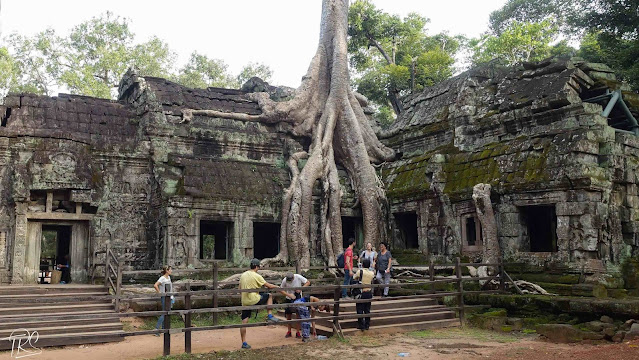 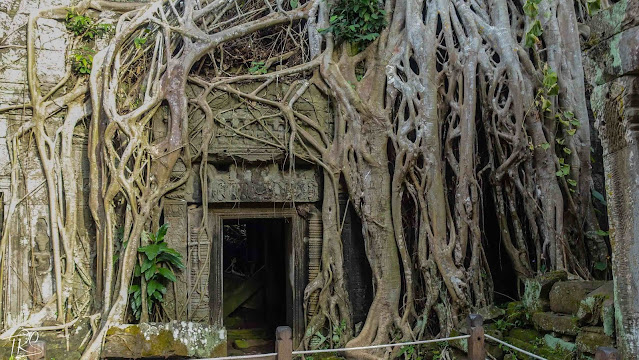 Ta Prohm Temple
The Banteay Srei temple (“Citadel of Women”) was built in X century by two counsellors to the Khmer King.  The temple is relatively small in size but has very rich carvings in hard red sand stone.  Again, the carvings represent stories from Hindu mythology.  The temple has extensive carvings of Apsaras (the beautiful women in heaven as Hindu mythology goes). 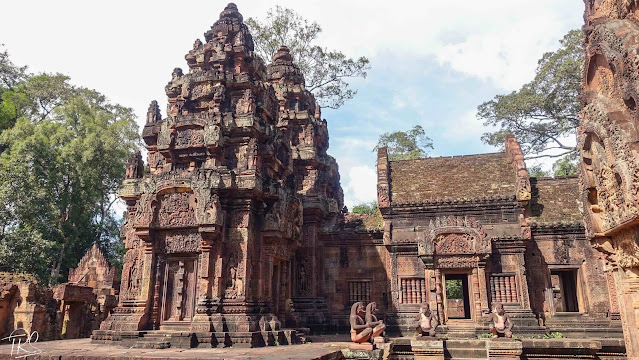 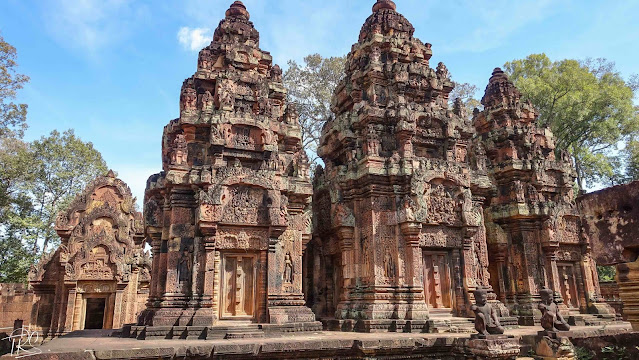 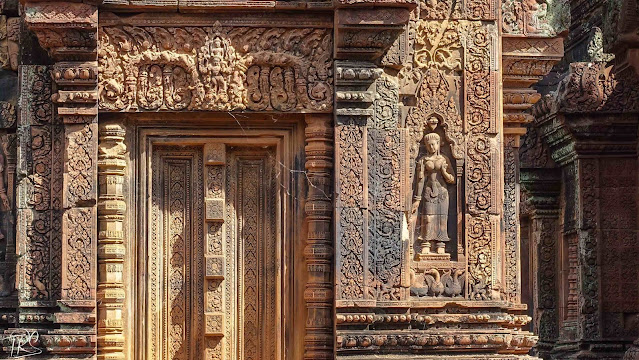 Banteay Temple:  Rich carvings in hard red sandstone
Angkor Thom is the gateway to the complex that houses more than thirty temples.  The gateway is guarded by stone warriors; and the complex is surrounded by a wide moat.  One can do a 2 hour scenic boat ride on the moat.
Angkor Thom is to the north of Angkor Wat.  Houses more than 30 temples.  Built by various Khmer Kings.  For Vishnu and Buddha.  The gateway is guarded by stone warriors. 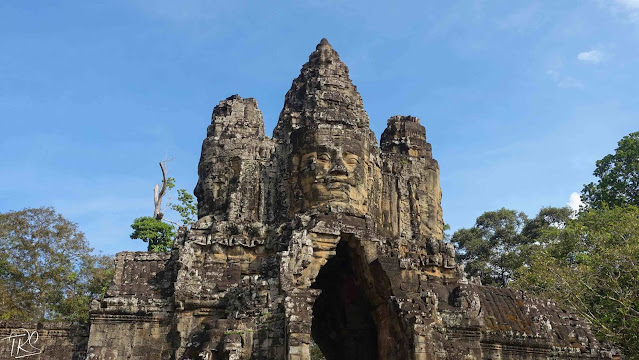 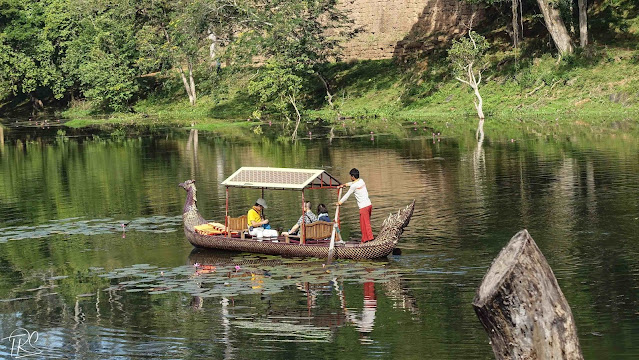 Angkor Thom Moat
Siem Reap is located on the shores of Tonle Sap Lake.  The lake has two odd behaviours:
One, the lake expands four times its size during rainy season.  The lakeshore villages float and move base as the lake expands or contracts.  Two, River Tonle sap that connects the lake to Mekong River flows one way in normal times and the opposite way when Mekong overflows with glacial melt from Himalayas. 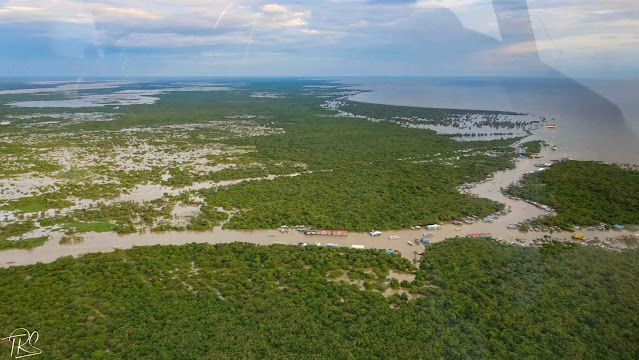 Floating village on the banks of Tonle Sap lake
Posted by T R Santhanakrishnan at 11:06 PM