Mauritius is a beautiful island with lagoons and beaches all surrounded by coral reefs.  The island is small; 65 km long and 45 km wide.

Mauritius is a peaceful country; does not have an army; and one of the four in the world not engaged in any armed conflict with any other country.

Mauritius has 1.3 million people (40% live in Port Louis) with a per capita income of $ 24,000 (thrice that of India; third highest in Africa after Seychelles and Equatorial Guinea).

Arabs have been coming to Mauritius from X century.  The colonisers came later.

The French used Mauritius (a) to loot stuff going between Britain and India in the pre Suez days and (b) grow sugar cane using slave labor.  The British evicted the French to stop the looting and let the French plantation owners keep their sugar cane farms and French laws but abolished slavery.  Instead, they brought more than half a million indentured labourers from India to do the work.

Result:  Mauritius is the only country in Africa where Hinduism is the largest religion.

Port Louis is the capital of Mauritius.  All places in the main island of Mauritius are less than 2 hrs drive from Port Louis.

Le Caudan Waterfront is the commercial hub of Port Louis and includes shops, restaurants, banks, and even a casino! 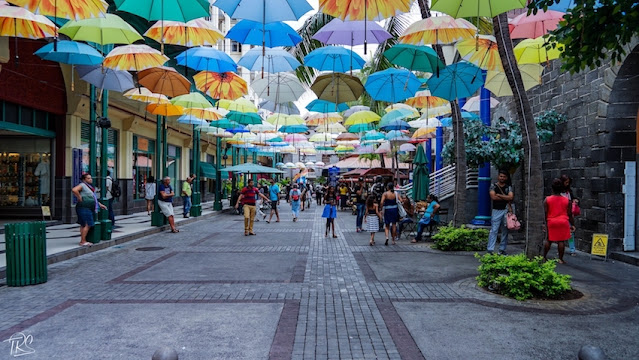 The waterfront has a variety of restaurants offering French, Creole, and Indian cuisine.


At the land end of Le Caudan is the Blue Penny Museum housing rare postage stamps including the famous "blue penny" and "red penny" stamps worth a fortune and bought and donated to the museum by a local bank.


The Citadel of Port Louis (also known as Fort Adelaide) is a XVI century fort built atop a hill to keep a watch on the city and the port of entry.  Today, it offers nice viewpoints to have a bird's eye-view of the city.

Marie Reine de la Paix (Virgin Mary Monument and Church) is another place to look at the city.  The monument is built atop a hill and has a church at the roof top.

Mauritius has many beaches and beach side resorts.  The Troux Aux Biches at the North West end of the island is one of the best with infinity pools stretching to the edge of the ocean.


Tamarin Bay in the West has the backdrop of volcanic hills, azure waters, and opportunities to watch bottle nosed dolphins.

The Maconde Rock is a little cliff between Le More and Baie du Cap in South.  The rock is on a hair pin bend on the coastal road.  A short climb up the rock gives you an awesome view of the southern coast of Mauritius.


In the distance, you can see Le Morne, a 550 m high mountain with a history.  Slaves used to escape from "hard work and torture" and hide in the myriad caves of Le Morne.  After slavery was abolished, soldiers approached the rock to announce the good news to those in hiding.  The slaves mistook this to be an attempt to apprehend them, climbed up the mountain and jumped into sea preferring death to "capture, hard work and torture"!


The Black Beach with a unique shoreline is a sight to enjoy.


The Gris Gris beach in the South had very powerful surf on the day we visited.

Mauritius was created by volcanic activity about 8 million years back.  Most of the volcanos in the country are now dormant.  The Trou Aux Cerfs volcano provides a back drop to most roads in Mauritius.  It is accessed through Curepipe, a very cute village with beautiful French style buildings.


The Ganga Talao is considered by the local Hindus as one of the sacred spots in the island.  A small quantity of water from Ganges river in India was brought to Mauritius and mixed into the lake to establish a symbolic link between Ganges River and Ganga Talao.  There is a Hindu temple on the shores of the lake and a giant statue of Hindu deity Shiva by the temple.  You would notice that the roads in Ganga Talao are wide.  This is so designed to accommodate more than 300,000 Hindus congregating in the area around the time of Maha Shivarathiri in end Feb and early Mar.

The Black River Gorge National Park is full of deep gorges, lush green rainforests and beautiful hills.  The park has two viewpoints with spectacular views of the landscape:  Gorges viewpoint and Macchabee viewpoint.  Piton de la Petite Riviere Noire in the park is the highest mountain the island.


Chamarel waterfalls, in the neighbourhood, is a 100 m high single drop waterfall.


Thanks to its lagoons, beaches, and coral reef, Mauritius is an excellent spot for water side recreation.  We went to Ile Aux Cerfs lagoon to do some underwater walking.  Your wear a large glass bubble around your head; the bubble is supplied with oxygen from overhead floating tanks.  You get to take a leisurely walk on the sea bed to watch the fish and the corals.  Truly an outstanding experience.

Our boat took us to the Ile Aux Cerfs waterfalls too.


We then took a submarine ride to see the corals.

Mauritius economy is based on three things:  (a) offshore tax haven for global investments into bigger high tax economies in India and Africa (but Mauritius is not a blacklisted haven; it conforms to global rules for tax havens) (b) tourism and (c) sugarcane farming.  In the past sugarcane farming accounted for 85% of the economy.  A visit to Mauritius is not complete without visiting the Pamplemousses Sugar Factory.


After a week in the Paradise island designed for honeymooners, what do we remember the most?  The broad shouldered locals (who need those shoulders to reach Mauritius in the pre X century era) who are very good in ship building and quite affectionate to all those around them.


That, and that alone, is the main reason for the success of Mauritius as a tourism driven economy.